In the run-up to the World Cup in June, Cappella Gabrieli is putting on a different kind of match: on 16 and 17 May the choir will sing works by English and Italian renaissance composers. Italy is fielding top players Palestrina and Monteverdi, while Weelkes, Tomkins, Gibbons and Dering will be playing for England.

The first half of this contradiction-filled program is given over to the English composers. The concert begins with the jubilant Hosanna to the Son of David by Thomas Weelkes. English church music fans will surely appreciate the Short Service by Orlando Gibbons and the Evening Service for Trebles by Thomas Weelkes. With their narrative character and restrained emotions, these works give the listener a taste of true Englishness.

How different is Weelkes’ When David heard - a particularly beautiful and moving setting of a father’s grief at the death of his son. Thomas Tomkins’ Woe is me expresses such deep sorrow equally aptly.

It is fortunate, then, that these pieces are followed by the playful Factum est Silentium, by Richard Dering, which celebrates how the Archangel Michael heroically chases an evil dragon from the heavens. This piece is set in Latin - a fitting transition to the Italian second-half, which starts with the tranquil beauty of Monteverdi's Adoramus te Christe and the cheerfulness of his Cantate Domino.

The last word in this concert goes to Palestrina - Catholic church music’s lead player of the counter-reformation. Cappella Gabrieli will perform three of his works: Ave Maria, the motet Tu es Petrus and mass of the same name. Palestrina's thorough and robust but also extremely clear and transparent compositions leave nothing to be desired. This is as music should be.

Tomkins:
Woe is me 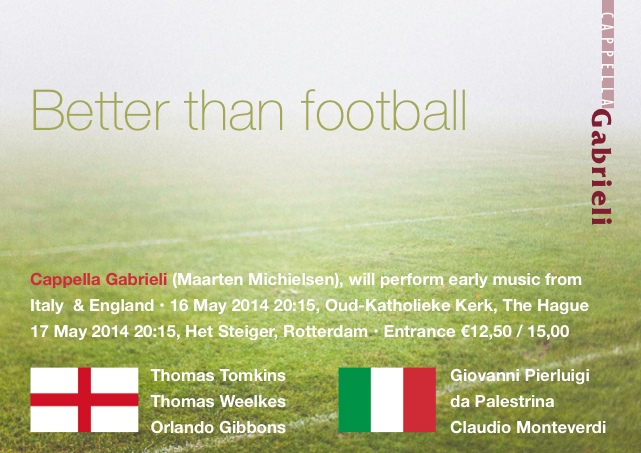