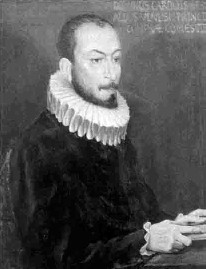 In 1603 Don Carlo Gesualdo da Venosa (1560-1613) published two books of Sacrae Cantiones: one for five voices and one for six and seven voices. In his madrigals he had already shown very unconventional ideas in his use of the chromatic scale, harmony and modulation, and for his sacred music he also used as yet unheard methods of expression. Together with the well-known Responses For Holy Week (1611), the Sacrae Cantiones form the lion’s share of Gesualdo's religious repertoire.

The Cantiones for six and seven voices have one striking problem, beside their other qualities: they have not survived complete. All twenty pieces are lacking the second soprano and bass parts, and incomplete music is rarely or never performed. It is, however, music that deserves to be heard. Igor Stravinsky agreed. Out of appreciation for the contrary composer, Stravinsky completed three of the twenty incomplete Cantiones to mark the four hundredth anniversary of Gesualdo’s birth.

The Rotterdam Choir Projects Foundation has taken it upon itself, in honour of the Sacrae Cantiones four hundredth anniversary, to complete and perform these pieces. To achieve this, the foundation has arranged to work with a number of contemporary Dutch composers. The foundation forms the governing board of the choir Cappella Gabrieli - directed by conductor Maarten Michielsen - who has substantial experience performing music from that period.

The Rotterdam Choir Projects Foundation asked a number of contemporary Dutch composers to complete the Cantiones. The composers were free to find a solution for the missing parts in their own style. One could try to reconstruct the missing parts, or take another more individual or modern starting point.

The founding considered a small group of composers for the seventeen Cantiones, and agreed a way to distribute them among the group of composers. The composers were initially provided with the (surviving) sheet music and instructed about the conductor and choir’s level and experience.

Stravinsky has not attempted reconstruction. In fact he seems to have avoided what in some cases might appear to be the prescribed solution. What he has done is to recompose the whole from the point of view of his added parts, with a result that is not pure Gesualdo, but a fusion of the two composers. That is not to say that Stravinsky’s additions are violations of Gesualdo’s style. Gesualdo could have written everything that Stravinsky added… The point is that he probably would not have done so.